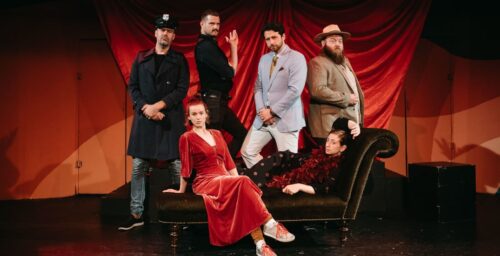 We’ve heard of great comedy shows, but the latest production from The Improv Center on Granville Island takes things to the next level.

This Halloween season, the improv theater company presents Stage Fright: Murder at The Improv. The murder mystery-themed show runs every Friday and Saturday from September 30 to October 29.

According to Jalen Saip, artistic director of The Improv Center, Stage fright takes the audience back in time to a decade in which drama reigned supreme.

“Stage fright is a collaborative murder mystery that relies heavily on the participation and imagination of our fantastic audience,” Saip explained in an interview with Daily Hive. “Set in the fifties, Stage fright aims to transport audiences back to a time when live theater was highly revered.

“The inspiration for the show came from watching a trailer for See how they walk and thinking, “A murder in a theater would be great fun, especially if our audience had to solve it.” I’ve always loved ‘behind the curtains’ shows like Sounds offso this seemed like a fun way to incorporate that into our programming with a bit of spookiness.”

The Improv Center will also be in costume as it turns into The Emerald Playhouse for the Stage fright. The eclectic cast is about to open its biggest show of the season, only to find the protagonist murdered.

Now a daring audience member must answer the call to help the improvisers solve the mystery.

“I hope the audience can fully immerse themselves in the story and enjoy the communal experience of the show,” added Saip, who is also an actor and photographer. “It’s been a wild ride in recent years, so it’s a privilege for TIC to provide a light-hearted thriller, even if only for 90 minutes.

“I’ve always been a big fan of Halloween because I love dressing up and playing characters. And who doesn’t love a ‘whodunnit?’ It would be very exciting if some of our guests also came in costumes that fit the era.”

It’s been a busy time for The Improv Center, which recently announced its new ensemble members. Like Stage fright and its regular Date Night and TheaterSports events, the company regularly hosts Drag, Stand Up and TIC House Teams shows.

“We are so pleased that our audience has returned to support live theatre,” said Saip. “We look forward to the future with great enthusiasm. There’s always fun to be had on Granville Island.”

Stage Fright: Murder at The Improv