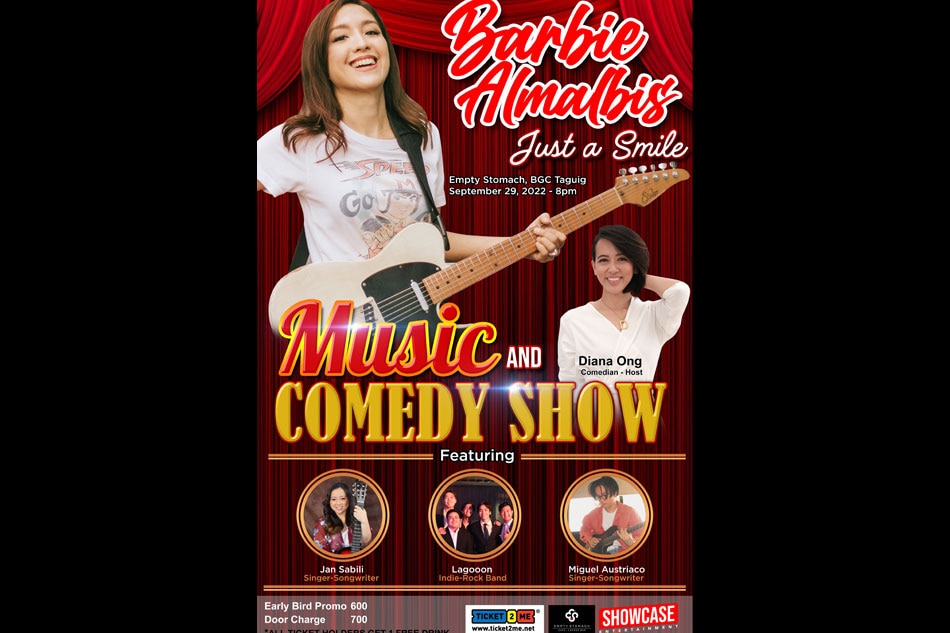 “Just A Smile” is based on one of the hit songs by Almalbis that won the 2006 Awit Awards for Best Performance by a Female Performer at the 19th Awit Awards.

“It was great fun playing live again. I really missed being in the same room and sharing music with people. While I enjoyed the unique experience of performing online and chatting in the comments section, nothing beats a room full of people sharing music together. Real faces beat emoticons every day!” she said in a statement from presenter Showcase Entertainment.

“I’m especially excited about ‘Just a Smile’, the music and comedy show. I haven’t been to a show like this in a while. I’m really looking forward to it!”

Other Almabis hits include “Torpe” and “Firewoman” with Hungry Young Poets; and “Tabing Ilog”, “Goodnyt” and “All I Need” with Barbie’s Cradle.

As a solo artist, Almalbis has four studio albums, the latest being “Scenes From Inside”, released in 2021 with “Kumpas”, “Silaw” and “Umagang Kay Ganda”.

Joining Almabis in “Just a Smile” is host Diana Ong, a finalist in Laugh Laban 2021. The comedian currently co-hosts the “Lady Boses” podcast.

Sabili is a 2018 Himig Handog winner for her original composition “Sugarol”, while Austriaco recently released the singles “Kanga” and “Villages”.

In 2020, Lagooon released his first single “Oceanside” under the Raushaus EP.

Tickets for the “Just A Smile” show cost P600 for the early bird rate and P700 for the regular rate, both including a free drink. For ticket details and more information, visit the Ticket2Me website and the Showcase Entertainment page on Facebook.