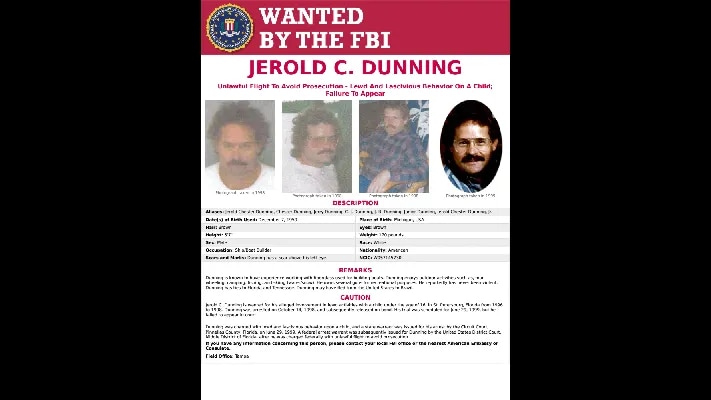 A St Petersburg man who disappeared more than two decades ago after being accused of sexually abusing his girlfriend’s teenage daughter will be profiled on ‘In Pursuit with John Walsh’ Wednesday night.

Jerold Dunning was set to stand trial on June 19, 1999, on charges of lewd and lascivious conduct towards a child. But he never showed up in court. According to previous coverage in the Tampa Bay Times, neighbors said they saw him packing a box truck and driving away from his home on the night of June 18.

Jerold Dunning is said to have committed lewd and lascivious acts with a child in Florida from 1996 to 1998. If you have any tip about its location, please contact your local #FBI office or the nearest U.S. embassy or consulate. #FugitiveFriday @FBITampa https://t.co/kURXAC2Kk3 pic.twitter.com/36MGNebika

Walsh, who is best known for the TV series “America’s Most Wanted,” hosts the Investigation Discovery program. His son, Callahan Walsh, “is leading the operation on the ground and working with the community and local authorities to find individuals of interest,” the cable network said in a press release.

The network has released this outdated photo of what they think Dunning might look like now, at age 62.

Episodes of the show focus on various issues from around the country. During each episode, viewers with information about the person they want are asked to call or text the call center at 833-3-PURSUE or submit tips online at InPursuitTips.com. Tips can be submitted anonymously and will be shared with law enforcement agencies, the release said.

The episode featuring Dunning’s story, titled “Evil Deception,” is set to air on Investigation Discovery at 9 p.m. EST, according to release. It will also be available for streaming the same day on discovery+.