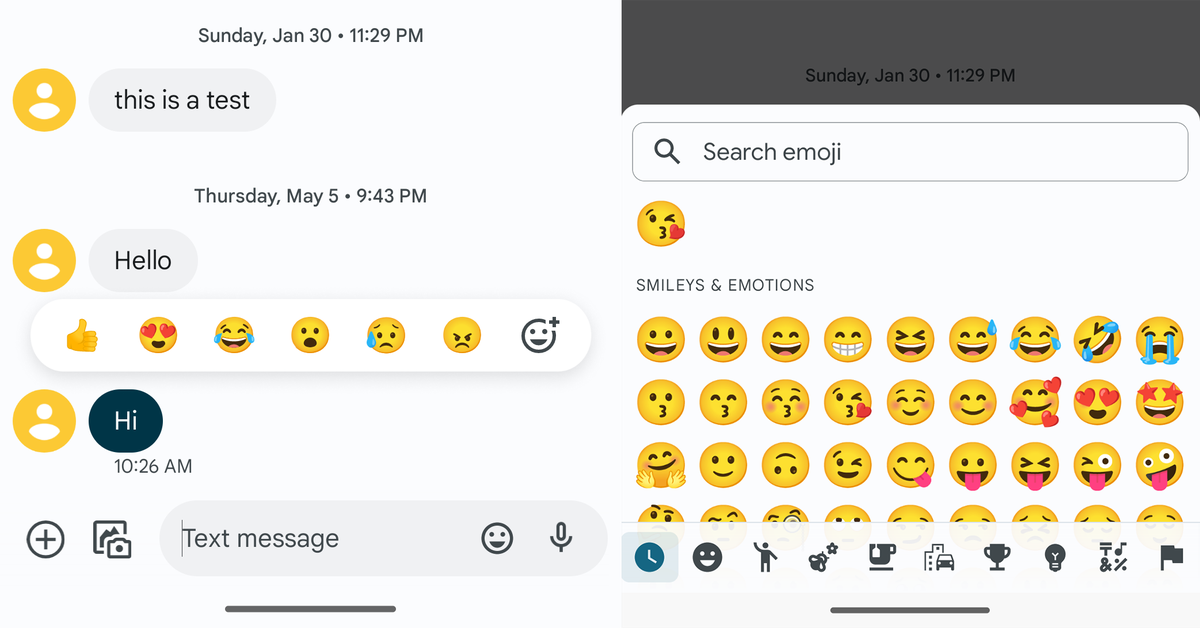 Google has begun allowing some users of its Messages app to reply to text messages with random emojis, rather than limiting them to the standard set of seven that have been available in the app for some time (via 9to5Google). The feature is similar to what other messaging platforms like Slack, WhatsApp, and paid versions of Telegram have: tapping and holding on a message gives you the standard emoji reactions, but you can then access the picker to respond with whatever you want.

The extended emoji reactions seem to be a limited test at this point – 9to5Google says it’s heard two reports of it being rolled out, and one while one is in progress The edgeThe company’s staff can access it, two other people who checked it cannot. Google did not immediately respond The edge‘s request for comment on the feature.

As with all features added to messaging services, the extra responses can be a bit messy depending on who you’re texting and what communication standards their phone supports. They seem to work just fine if both parties use RCS, the SMS replacement that Google is looking for. My phone doesn’t yet have access to the enhanced dialer, but my colleagues’ responses came up correctly when I used Google’s Messages app.

However, other configurations can get messy. On the same phone, which of course supports RCS, Samsung’s Messages app shows the response as a separate text message saying “😱 to ‘Can you reply to this message?'” The same goes when my co-worker responds to a text from an iPhone user, since that’s SMS only (much to Google’s chagrin).

It’s no surprise that the responses don’t translate to iPhones. First, Apple’s Tapback system only allows you to use a specific set of symbols, so it’s unlikely the company’s Messages app has the ability to add a random emoji to a message. Even if it were, who knows if it would be; after years of responses from Apple users appearing as separate text messages for Android users, it seemed the two companies had worked out a workaround, with responses from iMessage and Google Message translating between the two platforms. And yet, when I tested it today with the default responses, I was back to the same old system of parting”[emoji] until [message]” texts instead of beautifully rendered responses when messaging between an Android phone and iPhone.

Whatever Apple and Google have, I’m glad Google is bringing this feature to its SMS platform, even if it’s really only elegant if you’re doing RCS chats. It’s a feature I’ve always wanted everywhere, and it seems Google is working to make that a reality, at least for the people who use the app.